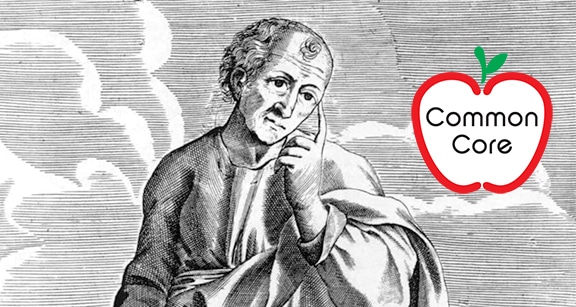 Mr. Martin Cothran was interviewed by David Kern of the Circe Institute regarding the Common Core State Standards Initiative in American Education, known as “Common Core.”

What Mr. Cothran describes is a consistent problem with progressive education.  The content knowledge approach in the most recent iteration of “the answer” to our society’s problematic educational system aimed at stuffing knowledge into students so that they could pass the all-important tests that somehow are to gage our students’ progress and abilities as a whole.

Unfortunately, as is always the case with this answer, it didn’t answer. As a friend of mine involved for decades in the public school system of California noted,

Students were given a year’s worth of a random assortment of subject area facts, that lacked any connection or cohesiveness.  Students were forced to memorize these random sound bites without a chance to achieve mastery or understanding, just so they could pass the test.  The concepts of mastery and understanding were left out because there were too many random facts to memorize so there was not time enough for students to achieve mastery and understanding!

Because the rote memorization of facts didn’t do the trick, we must now emphasize “critical thinking” skills.  After all, students weren’t doing any real critical thinking with regards to all these facts, so that must be the answer.

Now, the aim will be to instruct grammar school students to solve complex problems, but without the basic skills or the “content knowledge” they will need to be successful. It seems as if it is always an either/or situation with progressive education.  My friend says that without a clear understanding of the critical thinking skills attempting to be taught, and without a sound pedagogy to teach them, “the Common Core experiment will be like a rudderless ship that will crash upon the rocky shore of reality!”

Cothran notes that “the lack of content knowledge will further corrupt the process of passing our culture down to the next generation, which is the most important educational goal.”

In mentioning education as passing down of culture, Cothran is echoing a section of Russell Kirk’s essay, “The Conservative Purpose of a Liberal Education”:

Schooling was not originated by the modern nation-state. Formal schooling actually commenced as an endeavor to acquaint the rising generation with religious knowledge: with the awareness of the transcendent and with moral truths. Its purpose was not to indoctrinate a young person in civics, but rather to teach what it is to be a true human being, living within a moral order.

Being a good citizen is a byproduct of a good education, not the goal of a good education.  The long history of education, the one rarely ever discussed these days, tells us that children learn to understand what it means to be a “true human being” both by learning facts and figures and by learning how to build with their minds (using those very same building blocks of facts and figures).

This is simply grammar and dialectic.  Yes, children need to learn by rote.  But they also need to learn to think about those facts and figures.  They need to exercise that muscle between their ears, to actually connect the dots and make arguments. The progressive educators are not completely out in left field—content knowledge is important; critical thinking skills are important—they just think, like good citizens of the enlightenment kingdom, that the old tried and tested way of educating can’t possibly really work.  I would surmise, actually, that most educators these days have rarely heard of the old ways of educating.

Critical thinking used to be learned, partly, in a class called Logic.  I’ve noted for years how essays in my literature classes improve after the students have studied formal logic.  I’ve told my students for years that what I’m really after is teaching them to think.  I don’t care whether they can regurgitate my lecture notes, or a discussion on the Aeneid (well, that’s not quite true, I do care somewhat!)—what I’m really after is that they learn something, that they connect the dots gathered in the lecture and discussion, that they connect things in their own minds in ways even different from the ways I have. That’s learning the content and thinking critically about it.

But I am getting ahead of myself.  Grammar students are not going to be reading the original tale of Aeneas’ voyage from a doomed Troy to build a new Rome…yet.  They will probably hear of and read numerous bits and pieces and characters, and will arrive in my class with a good grounding in mythology (gods, goddesses, heroes, and stories), a good skill in writing (basic English grammar and sentence and paragraph construction and basic argumentation), a survey understanding of early Western Civilization (including the basic flow of the history, timeline and dates, and maps), and will have all that in their heads, ready to read the great epic of Virgil.

A real education takes time and patience, consistency and direction. It’s more like a story than a collection of facts. Passing our culture down to the next generation, teaching students to be truly human, takes an education that gives content and also teaches students to think. Yes, grammar students tend to learn grammar, but they are already doing small “l” logic even in grammar school. Yes, middle school students tend to learn logic, but they are still drilling in grammar.  The older students, and adults, for that matter, will always be needing to learn the grammar of things, and then to put them together into a coherent whole—without these skills, there really is very little learning and understanding of who we are.

The problem with progressive education is that it is always looking for the magic bullet—the new “answer.”  That answer, however, has been staring at us for millennium.  Humans haven’t changed that much, and they tend to learn in the same basic ways.  Perhaps it’s time to try educating students in the “old-fashioned” way; the way that worked for well over 2000 years before we found all these fixes for something that wasn’t really broken.