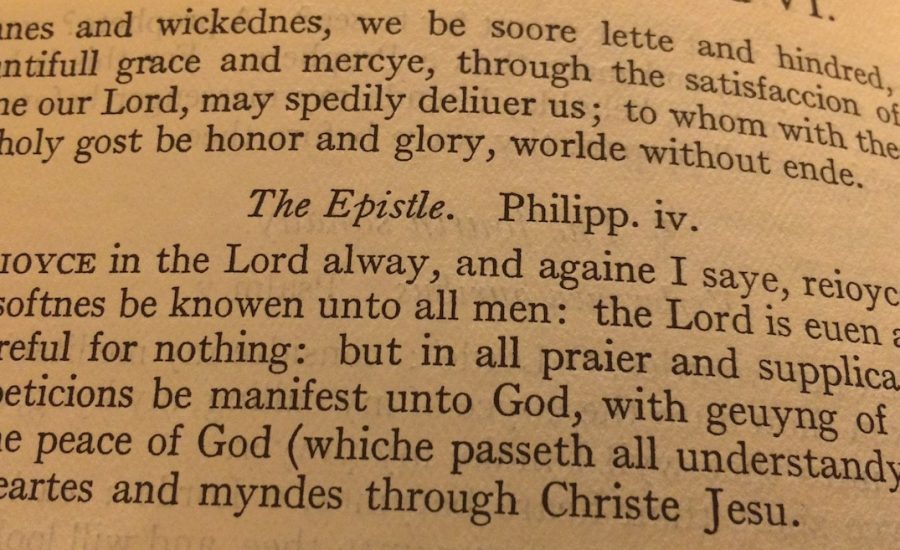 RISE UP AMONG US: THE SEASON OF ADVENT

By the Rev’d Dr. Derrick Hassert

Lex orandi, lex credendi. The law of prayer is the law of belief. This is a hallmark of classical Anglican Christianity. It oftentimes seems that Anglicans cling to a Prayer Book out of step with the modern age, a Prayer Book that has undergone relatively minor revisions and rearrangements since it was introduced hundreds of years ago. Do we cling to this Book of Common Prayer as some manner of museum piece, some cultural artifact? If Anglicans answer “yes,” we cling to the Prayer Book and its contents for the wrong reason. It should be acknowledged and explained, both within and outside of the Anglican tradition, that we cherish the Prayer Book because we believe it shapes and guides the Christian through an orthodox and biblical way of living the Catholic Faith. It does so by guiding the faithful through the Scriptures, through the doctrines, and through the Life of Christ as presented in the Church year.

As we have entered a new season of the liturgical calendar, we are called upon to relive the humble entry of the Word of God into the fleshy nature of our created existence. This season, Advent (which means “coming”) is often held to be the beginning of the Church year, for it is in the Incarnation that we find the genesis of Christianity itself. It is the time when we prepare in earnest for the coming of our Savior. While the Christmas season is indeed joyous and festive, too often we confuse Advent, this period of time before Christmas, with Christmas proper and fail to contemplate the season we are actually in and the reason for its existence in the life of the Church. The liturgical color of purple should alert us to the fact that this is a penitential season, a season of reflection and repentance. In the collects of this season we pray to “cast away the works of darkness.” We pray that the “hearts of the disobedient” may be turned to “the wisdom of the just.” We are forced to acknowledge that “through our sins and wickedness, we are sore let and hindered in running the race that is set before us.” We pray for grace and the help of God.

Christianity begins with the realization that we can’t save ourselves, that we can’t ascend to God.  God must descend to man.  In Christ, God descends to Man so that Man may be reconciled to God. Indeed, we need to be saved, yet we can’t do the saving ourselves. It has often been said that one of the clearly objective truths of Christianity is the doctrine of original sin, that we humans are crooked, erring individuals. We stray like lost sheep, following our own paths rather than what we know to be right. C.S. Lewis comments that, due to the abuse of free will in Adam’s choice, “Man is now a horror to God and to himself and a creature ill-adapted to the universe.” Now, according to our fallen natures, we are alienated from God.  It is not that God has lost us. We have lost Him. We have lost our Creator. Humanity has been separated from God’s grace by its own sin.  We share the same humanity as Adam, and as such our free will is no longer truly free.  We are bound by sin.  As the Confession for Morning Prayer states with alarming clarity “There is no health in us.”

It has often been said that there are three types of churches within the Christian faith—churches of Easter, churches of the Cross, and churches of the Incarnation; three specific “traditions” of Christianity based upon what they emphasize. Lutherans and Roman Catholics are often mentioned as examples of “churches of the Cross,” for placing a great deal of emphasis in preaching and in the liturgy on the sacrifice of Christ and its significance.  The Eastern Orthodox are often said to be “churches of the Resurrection,” for the emphasis within their liturgy, art, and theology on the Risen Christ—or Christ as King.  Anglicans are usually mentioned as the “church of the Incarnation,” a tradition often associated with the beautiful worship, customs, and hymns of the Christmas season. A full Christianity requires not only the glory of the Resurrection, but the pain and loss of the Crucifixion as well—and for either of these to have significance for humanity, the Incarnation must be held as a foundational truth.  It is in Advent that we prepare ourselves for this reality and why it occurred. God dwelt amongst, was tabernacled amongst His people.  He came to live and die as one of us, to ransom us from lives held captive by sin. Many Christians would like to have the glory of the Cross without the pain and loss of the Crucifixion (skipping Good Friday and going directly Easter). Others would suggest that the Cross can be embraced without the reality of empty tomb.  Still others would suggest that we can have both the meaning of the Resurrection and the Crucifixion, but that we don’t need to embrace the full humanity and divinity of Christ.  We need all three for a full and meaningful teaching of the Christian faith.

Humanity, left to its own devices, shows itself to be anything but progressive or ascending in its nature. Before the Second World War and the horrors of Holocaust, man’s ascension—his evolution—through reason and science were taken as given truths.  However, the consequences of sin ravage the history of humanity for all to see, even to the present day. Sadly, the myth that we can perfect ourselves through our own work and merits is becoming prevalent once again, but it is just that—a myth. An objective accounting of reality cannot deny that our will, bound and led by sin, has become a sickness to humanity and to creation. This is the reality that demands the coming of Christ, God made man for our sake. It is the reality that we are confronted with in the history of God’s chosen people Israel. As Israel had to prepare for the coming of the Messiah in history in its long history with the Law, so too must we prepare our hearts for His coming by acknowledging our utter dependence upon God and His mercy.

When the fourth Sunday in Advent comes upon us, let us pray in earnest this wonderful collect:

“O Lord, raise up raise up, we pray thee, thy power, and come among us, and with great might succour us; that whereas, through our sins and wickedness, we are sore let and hindered in running the race that is set before us, thy bountiful grace and mercy may speedily help and deliver us; through Jesus Christ our Lord, whom, with thee and the Holy Ghost, be honour and glory, world with out end. Amen.”

Fr. Derrick Hassert is a native of Illinois. With a Ph.D. in behavioral neuroscience, Fr. Hassert studied theology at St. Augustine’s Theological Institute in Charlottesville, VA. Fr. Derrick serves as curate at St. Andrew’s Anglican Church in Tinley Park, Illinois, and is also professor of psychology at Trinity Christian College.